Hi everyone, I am Motoki Luxmiwattana from Thailand.  While I am currently a Research Student in Tokyo University (basically a limbo state before getting into the actual postgrad course), for those of you who know (or are old enough?), I used to be in Chulalongkorn University.  In any case, I was asked to write something up as the dude who got the Best Adjprize in Osawa Cup 2018, so here I am.  I hope this piece will be potentially useful, or at the very least, not a waste of time for you!

To Begin With, Let’s Talk About Osawa Cup
You guys may not know this, but Osawa Cup – a.k.a. the infamous Cosplay Tournament – has a bit of a name value in circuits outside of Japan.  We have seen pictures of Japanese debaters dressing up – from bed sheet ghosts to Darth Vader himself – and giving speeches on the podium.  This time, I had the chance to see it up close – and bloody hell, I was dumbfounded.  YOU GUYS ARE WAY TOO SERIOUS ABOUT DRESSING UP. (褒め言葉です)  In one round, I saw tetris blocks (yes you read that right, for any foreign debater reading this) giving speeches for Christ’s sake.
And you see, I think this entire concept behind the tournament is amazing.  I think someone said something similar in the closing ceremony – it is about creating a venue where debating is fun, not just because the activity itself is fun, but also because the people who are gathered here are interesting human beings with whom you may have common interests and hobbies.  Someone dressing up as the Joker (I think therewas both the Heath Ledger-style and Jared Leto-style in the tournament) could open up some conversations about the DC universe and the filmmaking skill of Christopher Nolan.  Someone dressing up as Lelouch and C.C. from Code Geasscould open up conversations about your favorite anime.  (My favorite is still the Saint Young Men team, by the way.)
The possibility is endless, but the point, I think, is finding that “fun” thing about other debaters that may or may not have to do with debate.  When I look back to my undergrad years(which is a while, lol), I realized that was also one big reason why I spent time going to international tournaments:  because the people there are generally fun to hang around!  OsawaCup, with its interesting, somewhat peculiar Japanese twist, seems to embody that “fun factor” of debate tournaments.  What I am trying to say here is this:  debaters of the world, socialize!  …Okay, may be that was too brazenly Marxist in its tone, but you get the idea. 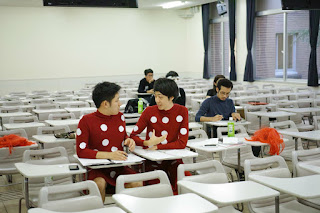 Motoki-san is so serious while judging,
though there are funny cosplaying debaters.

On Judging
So I was lucky enough to receive the Best Adjudicator prize.  Allow me, from this position of likely short-lived, temporary status of power and authority (insert evil laughter), to discuss what I try to do in my adjudication and feedbacks.  These are not really tips or techniques – they are more of my personal ethics/style in adjudication.

1) Care about the process:  specifically, the analytical process the speaker is going through in order to explain their point.  Many arguments in debate tend to have similar premise with similar conclusions – the “cookie cutter” or “canned” versions of the arguments, so to speak.  But that is not a reason to assume the nature and specificity of the analysis just because they are using the tagline you have heard somewhere else.  Someone might be experimenting on new arguments, while someone else might simply not know the canned version of analysis.  In either case, it is the “duty” of the adjudicator to track that thought process, and assess the persuasiveness of the speech based on that.
This is part of the reason why, if you have heard my adjudication/feedback at some point, you might have heard me trying to quote what the debater said.  I feel it is important for the adjudicator to not only “take into account” the unique twists and turns the round took, but also make sure that the debaters are aware how that uniqueness affected the way the adjudicator thinks.  This does not mean unique arguments are automatically better – on the contrary, it could be less persuasive.  In either case, it is important to comment on those specific analysis so that the debaters can A) properly assess the adjudicator and B) improve with those creativity they may have even further, not just falling back to the “canned” version of how that argument “should” be run.

2) Care about explaining yourself:  related to the previous point, we as adjudicators owe it to the debaters to explain why we decided to “take (取る)” certain points and did not in some other cases.  Explain the source of doubt you had to certain arguments – was it intuitively strange?  Was it being attacked by some other team?  Was it an incomplete argument that had a gap?  Was it something you understood and was convinced that the statement is true, but they did not explain how that links back to the round?  Conversely, if you felt certain arguments were convincing, what were the analysis that was said that convinced you?  These are questions that can only be answered through the way the round unfolded – hence the relation to the first point of caring about the specific process of thought presented in the round.
Sometimes, as adjudicators, we have that nagging feeling something just does not sound right.  If the reason that is happening is because of my own bias, what I would do is to firstly shut out that bias as much as possible.  But also importantly, sometimes the only way you can resolve the situation is through relying on such bias – if that is the case, explain why that had to come in to the round (often times, it is because debaters are making claim against counterclaims that do not properly clash, and leave you to “pick one,” so to speak).
Make no mistake, the adjudicator stepping in to the debate is highly problematic.  It is just that sometimes it is unavoidable (this in itself is a controversial statement, by the way).  The point is, be aware of what you are doing – and explain that thought process to the debaters.

3) Care about timing, a.k.a. “dynamics”:  specifically, the question of “when was that said?”  The hypothetical situation is this:  the Member of Opposition did not do that well, but laid out the arguments.  The Government Whip responds to those lackluster version of Closing Opposition case, which makes you feel “ah, they have done enough.”  Then the Opposition Whip comes in to re-package, and really make all the arguments that MO said sound very, very unique and impactful.  What will you do?
To be honest, I do not think there is an automatic answer to this (like many other things in debate, hahaha).  What I want to emphasize here is to also consider the “timing” that certain arguments, responses, POIs, etc. were brought up – because those often SHOULD affect the way the adjudicator see the round.  After the round, the adjudicator is in the position of having a “God’s view” when they look through the notes, assessing individual points.  We see how certain argument from LO interacts with MG and vice versa – but were those “interactions” something that happened in the round?  In other words, what was the “timing” that the interaction happened, and how “conscious” were the debaters of those interaction?
This may sound trivial, but it is something I try to pay attention to.  I personally feel that it is the best way to “reflect” what actually happened between the 8 (or 6, depending on the format) individuals who spent an hour discussing an issue.  This obviously is not the most correct way to adjudicate rounds, and might even be a double-edged sword – it might make you over-penalize or over-credit a team based your perception that “they were not conscious” in the worst case – so do take this with a grain of salt.  From my experience, though, it has been somewhat useful in the course of my adjudication, so I will just throw it out there.

In Conclusion
This is getting a bit too long, so I will wrap things up.  The points I discussed earlier are not “strategy” or “techniques” –these imply a method that makes you succeed/improve in the competition – they are not meant to be that preachy.  Instead, they are things that I want to pay attention to because certain adjudications I have been inspired by (even when they gave me the loss) seemed to have these features.  They did not simply justify why I lost – they told me how, and when I was winning or losing.  Those are things I strive to emulate in my adjudications – it is just as simple as that.
Also, I am open to cosplay suggestions for next year’s OsawaCup, in case for some random devilish reason I become interested in dressing up.  Nothing too weird, please. :) 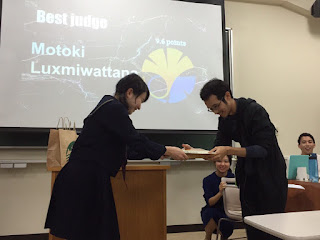 Congratulations on the Best adj Award!
Looking forward to seeing your amazing cosplay next year.