Hi, this is Kiyonobu Tamai from KDS taking a weekend off from the grueling weeks of competitive tournaments (starting from HKDO to NEAO). Today I’m going to write about my experience of this year’s BP Novice which I participated as KDS B with my junior Kaito Suzuki. Seeing the recent shift of this community of adopting English in fields other than during rounds, I’ve decided to write this blog in English as it would be the most inclusive language. Please bear with my poor writing.

Despite being in danger of failing to break with only having 5 team points after round 3, we were lucky enough to win the whole tournament. From pre-quarters to semis, every round we faced two teams from KDS making it seem as if we were in Hiyoshi practice. It was interesting to see two, freshmen-only teams in the Grand Finals. I guess that resembles how strong this year’s freshmen are. Although this year’s BP Novice was held separately with Kanto and Kansai makes winning the tournament less prestigious, I’m still delighted that I was able to finish my final Novice tournament as Champion.

The so called “Tournament rush” of autumn season makes it quite difficult to secure time to prepare as a team unless you are participating in every tournament with the same partner. It would have been wiser to start practicing (or even make an effort to start practicing) as soon as we have teamed up, but since my partner was doing well in his other tournaments (he actually won both), I wasn’t much worried and thought starting team practice after Umeko Cup would be enough. This was a terrible idea. After teaming up at the practice on Monday right before the tournament, we realized that nothing was working well. Idea sharing during prep time was awkward and our case was full of holes. After we received feedback from the judge, we were repeating the word “Yabai” like some Japanese comedian.

So what did we do to improve? Firstly, we shared our views we had towards debating as much as possible. This would include things like how we would structure our arguments and rebuttals, to more general things like types of cases and extensions. This made a basis for us to understand each other’s ideas more easily. Secondly, we systemized how we would use our prep time. This might be something every team would do but it’s good to develop a system which is most optimal for your team. For instance, our team had more time to flesh out arguments since my partner needed less time to write his script. Once we were done with these two tasks, we kept on prepping past motions. After finishing around 15 motions, we felt more comfortable sharing our ideas. This may just be a psychological issue but this matters especially when you’re OG with less time to spare. These last-minute emergency sessions we had at McDonalds until midnight, or in the library between our classes, helped a lot to build our confidence towards the tournament.

We started off our first two rounds quite well, relieved that our efforts paid off. Round 3 became a tipping point when we took fourth place after being boxed out of the whole debate. As a result, we needed to take first place in our last round in order to break (later on we realized that we could of broke even if we took second). This made us incredibly nervous, almost to the extent of panicking. Eventually we accepted our situation and focused on winning. We were extremely desperate. Kaito was like a hardcore rapper when he was delivering his member speech. Listening to my partner dominate the whole round made it easier for me to calmly deliver my whip speech, which would be vital in securing the win. Thankfully we were able to take first place and break 13th with 8 team points. We felt relieved but that quickly disappeared when we looked at the match-ups for the break rounds and found out that we were in a branch packed with KDS teams. I slept early knowing that tomorrow would be a tough day. 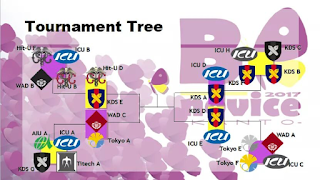 As I mentioned before the break rounds were more like Hiyoshi practice, each time facing two teams from KDS. We proceeded to the semis all along with KDS F (Junji and Yusuke) and managed to win over them on a split decision, which means we made it through to the Grand Finals. This personally means a lot because that’s where I lost in all of my previous novice tournaments (Umeko Cup, last year’s BP Novice, and Gemini Cup). I was pretty nervous but the several messages I received from my seniors calmed me down before the round. Thank you very much.

The round itself was already a fulfilling experience. I could see people nodding their heads and smiling during my speech. I felt that I was touching the essence of debating which is about persuading the audience, a thing which makes this sport more than just a game of logics. On top of that, we were announced as Champions in the closing ceremony. A strong sense of accomplishment rushed through my mind. I knew that it is these moments which make debating something worth striving for. Recognizing that it will take some time, I thought that I want to work hard to make similar achievements in open tournaments as well.

First and foremost to my partner Kaito. Thank you for trusting me all the way even after rounds I gave you jacked-up principles. You have tremendous potential to become strong and surely will continue to improve as you did throughout this period. Wish us luck in future tournaments.

Next to the members of KDS. I feel grateful to have such people that I can genuinely enjoy competing with because it makes regular practice not just possible, but also vibrant and motivating. Congratulations to the other 6 teams that broke and fought their way through the break rounds. Let’s keep up the good work.

Last but not least, to the members of the org com and adj core. None of this experience would have happened without you all. We must not take it for granted that we have this tournament every year. Thank you for all the time and effort which was necessary to hold this wonderful tournament.

Thank you for reading till the end. I hope you enjoyed even a bit of it.