I’d like to divide this entry into the following three sections.

I joined KDS around a month before the competition, and our practices mainly consisted of rounds and lectures. Although I’ve debated for around three years, I learned a lot in this sliver of time by returning to the basics. I focused particularly on improving the structure of my speech - it’s a lot easier for the judge to record my ideas when I’m properly numbering and signposting. There were also tweaks in the way I made rebuttal - numbering was a key component of the layered refutation, as the dimensions to which I was referring to needed to be clear and readily understood by the judge. I did not have time to practice with my partner before the competition, as he was incredibly busy - which is to be expected. I remember panicking at one of the practice rounds at KDS after clashing with the other, well-coordinated teams. The full force of the deputy speech, especially in NA style, was something I came to apprehend. Therefore, my goal was to be able deliver a substantive that could withstand deputy opposition, to the extent where I would be able to still present it in my reply. Having a readily comprehensible structure and integrating deep analysis/analogies would prove to be of incredibly importance, especially in the competition.

In this section, I’d like to briefly present the case we provided in each round, along with some of my personal thoughts.

We were judges. The crux of the debate was ultimately the characterization of the people that each side wanted to protect. Are they the impoverished or deeply religious, deprived of quality education like the Government describes, or are they the severely bullied, mentally unstable individuals on the verge of committing suicide like Opposition says? Both characterizations are plausible, and their respective principles rest on its veracity and urgency. I realized that I, as a speaker, have the burden of clarifying the contrasting contextualizations if I want to win. On another note, it was the first time that I judged a round in an actual competition - and it was heavy.

R2: THBT media should not broadcast news of suicide

We were Opposition, and were up against an adept WAD team. Our case for Round 1 was as follows. The act of committing suicide is not recognized as something that is bad in all instances - the right to bodily autonomy is something inherently of value. Therefore, it is wrong, in principle, to impose a policy that openly condemns the act. Social discourse and the ensuing societal consensus is of greater importance because of suicides’ controversiality. However, we concede that there are regrettable cases of suicide prompted from systematic issues in society. On this, suicide coverage is important in highlighting the structural problems that exist in corporations, culture, etc.
I was told (and did feel) as if I were reading a script, without actually understanding the material. I got the lowest score in this round, and came to understand the gravity of being honest - I should have put more emphasis in my comprehension of the arguments, before I loaded on more substantives. This cookie cutter argument, however, would prove to be of grave importance on my next round.

We were Opposition, and were up against the Joint team. Our case for Round 2 was as follows. While Government raised the importance of the utilitarianism calculus in a paradigm with limited resources, we cast doubt on the extent to which resources were limited, and elaborated the importance for individuals to decide for themselves whether they want to live or not. This empirical decision has to be made by the individuals - the state has no or a comparatively inferior method of understanding the needs of the terminally ill.
This round was just awesome for me, as we were all students or alumni of the same high school debate club. Although I felt that the Government was at a disadvantage from the get-go, the debate was nonetheless very heated. It was also nerve-wrecking to speak before a bigger audience - I guess that’s what I get for teaming with one of the living legends.

R4: TH regrets the use of civilian spyware applications between couples such as Dr. Fone, Spyera, and FlexiSpy that allow users to track phones, text messages, and all media and applications on the phone

We were Government, and were up against another strong WAD team. Our case for Round 3 was as follows. First, owing to the inherent power balance in a romantic relationship, abusing the spyware legitimizes the infringement and eventual nullification of privacy within individuals. Second, the existence of such spyware invites irrational paranoia between couples when they find out that their partners are talking to other people. Lastly, the spyware gives rise to a norm that the mutual and complete provision of information between individuals is a prerequisite in a relationship, which lead to other collateral harms (such as reluctance to start relationships).
This was likely the iconic “love motion” for this year’s Elizabeth Cup, and I have to say I really enjoyed the illustrations my partner and I provided (I was teased for being way too explicit and “hyper”). Although the motion was initially difficult to prepare for, the round was a most pleasurable one to conclude the competition with.

One of the senpai I revere told me that this competition was more about making friends than winning. I think he was right. I was able to socialize with the new people I would be debating with, both within my club and out, which was tremendous fun. I was delighted to meet people who shared similar ambitions to become better speakers, and spark new friendships and rivalries. I was also able to catch up with old friends and kouhai, and meaningfully discuss about the future of debate (maybe a tad too early for a 1st year).
*Senpai is a Japanese honorific used when someone is older than you in age or they have more experience in a field than you. The opposite being Kouhai.
Aside from the social, I am immensely grateful to my partner, Mitsushi senpai, for his participating with me and for continuously supporting me throughout. It was because of his advice that I was able to improve with each round, and I cannot thank him enough for giving me a goal that I can strive for. It is now my ambition to become an individual that can support others the way you supported me. Thank you so much.
Lastly, but definitely not least, I would like to express my gratitude to the all the individuals that made this competition so memorable. To the staff members who worked day and night to organize and execute, to the strong teams that we had heated rounds with, to the kind people that I was able to meet and befriend. Thank you all.
I didn’t expect this entry to become this sappy, and I hope you didn’t cringe as much as I did. Thank you for reading until the end. 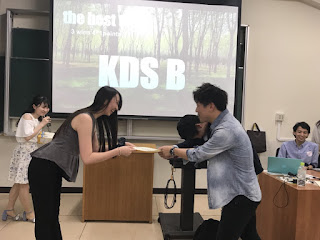 Congratulations on your achievement!